The most powerful birthday in the world

Being that this is a .44 Magnum, the most powerful handgun in the world, and would blow your head clean off…
You’ve got to ask yourself one question: do I feel lucky?
— “Dirty” Harry Callaghan

I am pretty lucky, after all. I have work I like, friends I like, my daughter, there’s a pie shop within walking distance, I’ve been hanging out ont he web writing these birthday posts for sixteen years now. And 44 is a “happy” number according to Wikipedia, and also the UK’s international dialling code. Internationalism is a lot on my mind, since Brexit happens tomorrow, and now I have to look at government guidelines on what I have to do when “travelling for business”, which speaking at conferences in Europe apparently counts as. I am sure that this will make my life more complicated; any time you have to jump through a bunch of hoops to fill out forms, someone will screw it up, and that someone is usually me. I wish being a metropolitan elite came with the benefits that it’s supposed to so I could counterbalance them.

Anyway, politics aside, let’s leave myself another note for next year. I’m spending some of today writing proposals for work, which is good stuff. Future me, this is the — how shall I describe it so that I know what it is but it remains secret? Let’s call it the Vicious Cabaret project. Looks like that may happen, which is cool. I’ve also made a bunch of progress during January on the top-secret Swordcello project, which shall remain under wraps, but wheels are moving. Things are OK, generally. I got this fantastic envelope around a card: it’s great having friends who are artists; nice one Gaby. 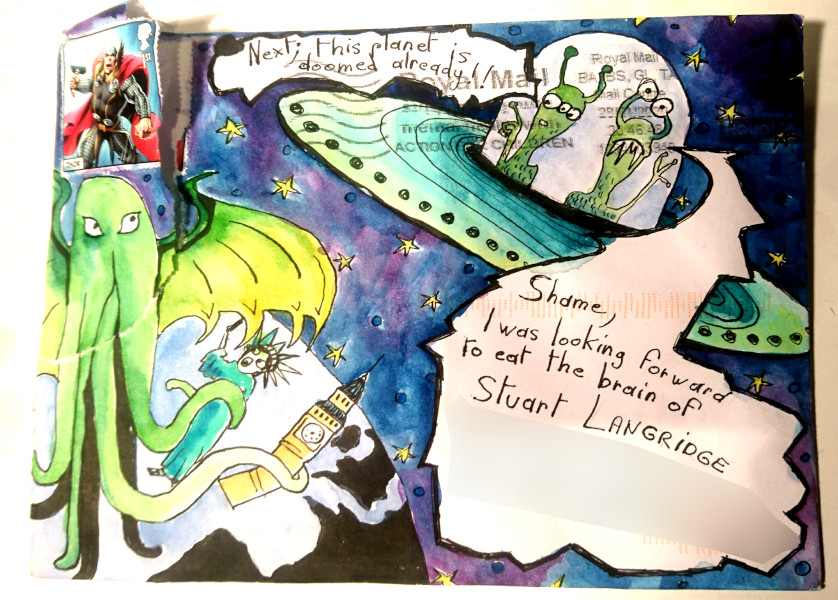 Interestingly, last year I was at BrumPHP the day after my birthday; this year, I’m there tonight! So pop along; might be a pint or two.

Happy birthday to me.