My flat has terrible mobile coverage. It’s okaaaay-ish in the living room and dead in the bedrooms, and it’s infuriating. You might be thinking, but Stuart! you live right in the centre of Birmingham! surely coverage in a city centre would be amazing! at which point you will get a look like this

and then I will say, yeah, it’s something to do with the buildings or concrete or something, it’s fine when you’re outside. It’s an old building. Maybe they put copper in the walls like in the Rookery or something. Anyway, whatever, it never worked, regardless of which operator you’re on. So, when I moved in, I contacted my operator, Three, and said: this sucks, do something about it. They said, sure thing, install our Wi-Fi Calling app, Three in-Touch. Which I did, and managed for two years.

I say “managed” because that app is terrible. The UI is clunky, it doesn’t handle picture messages, there’s no way to mark a message read, the phone call quality cuts out and breaks all the time, and most annoyingly when you get an SMS it shows a notification but doesn’t play a sound, so I have no idea that I got a notification1. I’ve missed loads of SMSes over the last couple of years because of that. 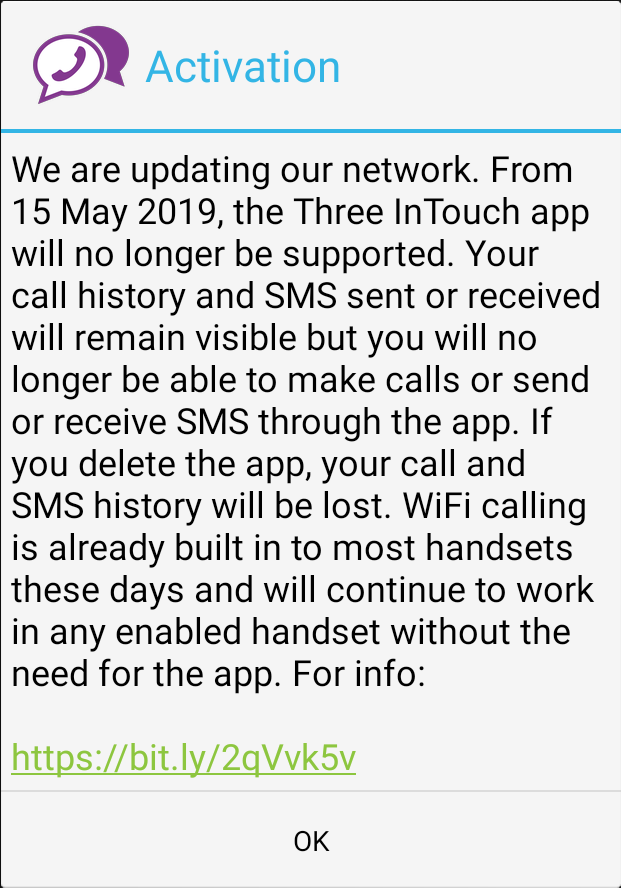 Ah, thought I. WiFi calling is already built in, is it?

You see, there’s a problem with that. On iOS it’s built in. On Android, on a lot of phones, it’s built in only if you bought the phone from your carrier, which I never do. It needs some special bit of config built into the firmware for wifi calling to work.3 So I thought, well, I’m screwed then. Because Three won’t update my Z5 Compact to have whatever firmware it needs to do wifi calling, they’ve killed the (execrable, but functional) app, and I’m not buying a new phone until the phone industry stops making them the size of a football pitch.4 I got on the live chat thing with Three, who (predictably) said, yeah, we’re not sending you the firmware, pull the other one, son, it’s got bells on.5

And then, a surprise. Because they said, howsabout we send you a Three HomeSignal device? It’s a box that plugs into your wifi and then your phone sees it as a phone antenna and you get good coverage.

And my brain went, what, a femtocell? A femtocell like I asked you about when I first started having coverage problems and you swore blind didn’t exist because everyone has wifi calling now? One of those femtocells?

Having been taught to never look a gift femtocell in the mouth, though, I didn’t say anything except “yes please I’d like that, cheers very much”. And so it arrived in the post two days later. Result.

However, the user guide leaves a bit to be desired. 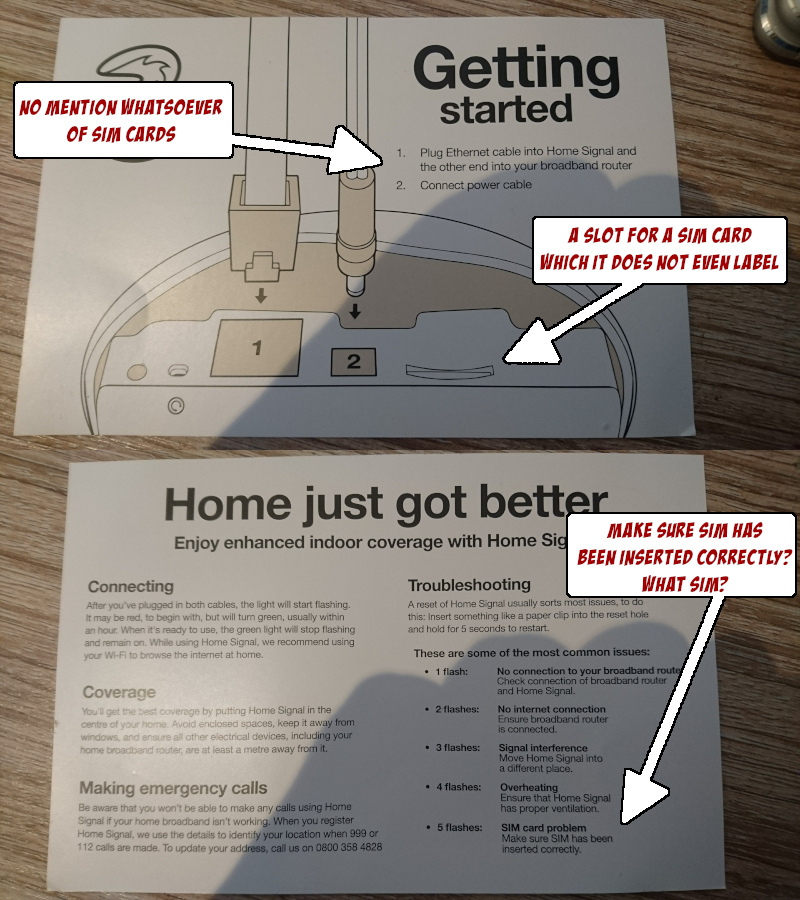 I do not know why the user guide completely ignores that you need to also plug a SIM card into the HomeSignal device, but it does in fact ignore that. You should not ignore it: you need to do it, otherwise it doesn’t work; you’ll get an error, which is the LED flashing red five times, which means (in the only mention of a SIM anywhere in the user guide) “SIM card problem”. At which point you think: what bloody SIM card?

More confusingly still, Three include two SIM cards in the package. One is a Pay as you Go SIM. This is not the one you want. I don’t know why the hell they put that in; fine, if you wanna sell me on your products, go for it, but you made the HomeSignal process a billion times more confusing. The SIM card that goes into the HomeSignal device is on a special green card, and it says “HomeSignal device only” on it. Put that one in the HomeSignal box. The other one, the Pay as you Go one, you should sellotape it to a brick and then send it back to Three, postage on delivery.

Once you’ve done that, it works. So, Three, if you’re listening: one bonus point for finally deciding to update the awful Three in Touch app. Minus twenty points for not having a replacement for people who didn’t buy phones from you. Plus another twenty points for offering me the Three HomeSignal femtocell which fixes my problem. Minus a little bit for the bad instructions which don’t say that I have to put a SIM card in, and then minus quite a lot more for putting two SIM cards in the box when I do finally work that out! So, on balance, this is probably about neutral; they have fixed a problem I shouldn’t have and which is partially caused by phone manufacturers, using a technically very clever solution which was confusingly explained. Business as usual in the mobile phone world, I suppose, unless you’re using an Apple phone at which point everything works really smoothly until it suddenly doesn’t. One day someone will get all of this right, surely?