OwnTracks and a map

Every year we do a bit of a pub crawl in Birmingham between Christmas and New Year; a chance to get away from the turkey risotto, and hang out with people and talk about techie things after a few days away with family and so on. It’s all rather loosely organised — I tried putting exact times on every pub once and it didn’t work out very well. So this year, 2017, I wanted a map which showed where we were so people can come and find us — it’s a twelve-hour all-day-and-evening thing but nobody does the whole thing1 so the idea is that you can drop in at some point, have a couple of drinks, and then head off again. For that, you need to know where we all are.

Clearly, the solution here is technology; I carry a device in my pocket2 which knows where I am and can display that on a map. There are a few services that do this, or used to — Google Latitude, FB messenger does it, Apple find-my-friends — but they’re all “only people with the Magic Software can see this”, and “you have to use our servers”, and that’s not very web-ish, is it? What I wanted was a thing which sat there in the background on my phone and reported my location to my server when I moved around, and didn’t eat battery. That wouldn’t be tricky to write but I bet there’s a load of annoying corner cases, which is why I was very glad to discover that OwnTracks have done it for me.

You install their mobile app (for Android or iOS) and then configure it with the URL of your server and every now and again it reports your location by posting JSON to that URL saying what your location is. Only one word for that: magic darts. Exactly what I wanted.

It’s a little tricky because of that “don’t use lots of battery” requirement. Apple heavily restrict background location sniffing, for lots of good reasons. If your app is the active app and the screen’s unlocked, it can read your location as often as it wants, but that’s impractical. If you want to get notified of location changes in the background on iOS then you only get told if you’ve moved more than 500 metres in less than five minutes3 which is fine if you’re on the motorway but less fine if you’re walking around town and won’t move that far. However, you can nominate certain locations as “waypoints” and then the app gets notified whenever it enters or leaves a waypoint, even if it’s in the background and set to “manual mode”. So, I added all the pubs we’re planning on going to as waypoints, which is a bit annoying to do manually but works fine.

OwnTracks then posts my location to a tiny PHP file which just dumps it in a big JSON list. The #brumtechxmas 2017 map then reads that JSON file and plots the walk on the map (or it will do once we’re doing it; as I write this, the event isn’t until tomorrow, Friday 29th December, but I have tested it out).

The map is an SVG, embedded in the page. This has the nice property that I can change it with CSS. In particular, the page looks at the list of locations we’ve been in and works out whether any of them were close enough to a pub on the map that we probably went in there… and then uses CSS to colour the pub we’re in green, and ones we’ve been in grey. So it’s dynamic! Nice and easy to find us wherever we are. If it works, which is a bit handwavy at this point.

If you’re coming, see you tomorrow. If you’re not coming: you should come. :-) 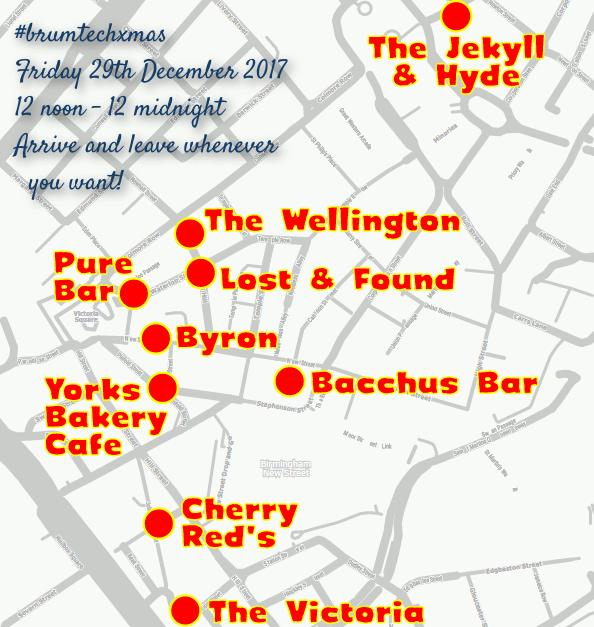