This morning I woke up to an email from YouTube saying that some music company had claimed I used their music without a licence in one of my videos, and so I would no longer be able to monetise that video.1 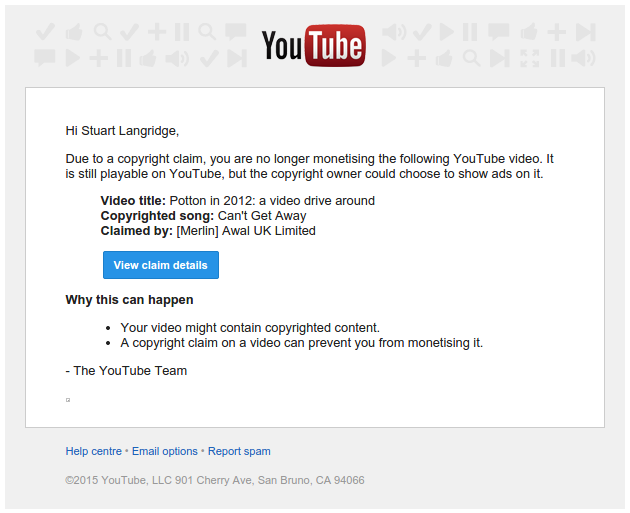 Hang on, thought I. That’s the video where Dad and I drove up every street in Potton. Didn’t I use Creative Commons music for that?

Yes. Yes I did. It was “Background Elevator Music (Loop-able) by Austin Graver,2 used under a Creative Commons Attribution licence, and that’s explicitly called out both in the YouTube description of the video and in the credits in the video itself. 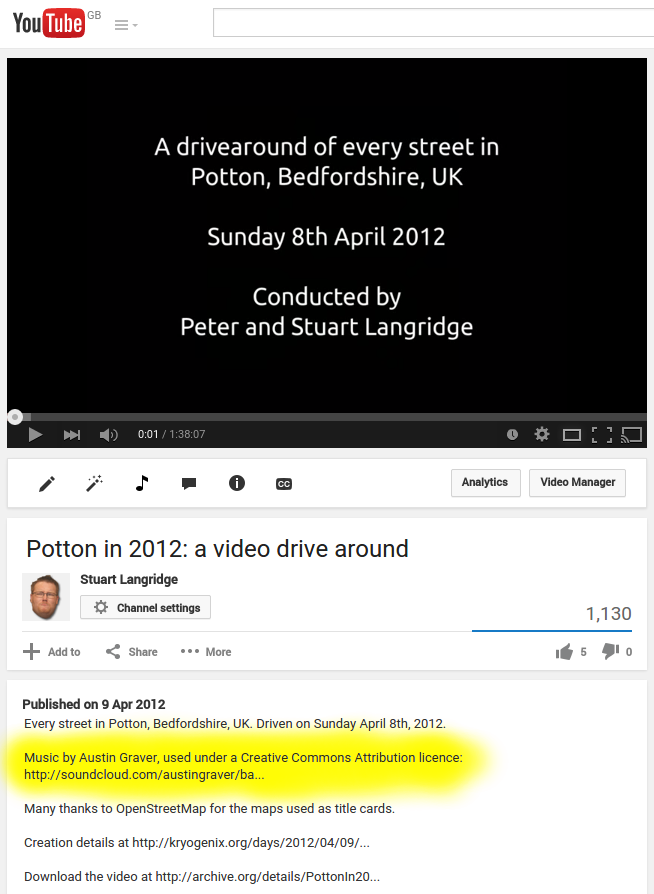 So, I follow the “View Claim Details” link and get told that “your video may include music that is owned by a third party”, which it does not, and I assume that some sort of automatic Shazam-like robot downloaded the video, incorrectly matched it against its list of owned music, and mechanically filed the claim. 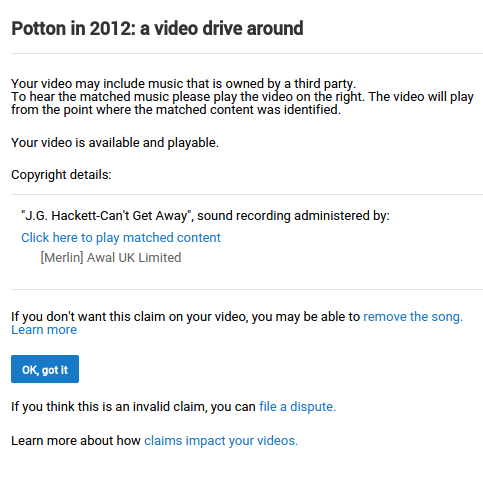 Fortunately, I then get a link to file a dispute. Which gets a bit confusing: I’m then asked why I’m filing a dispute, and presented with a little menu of options. 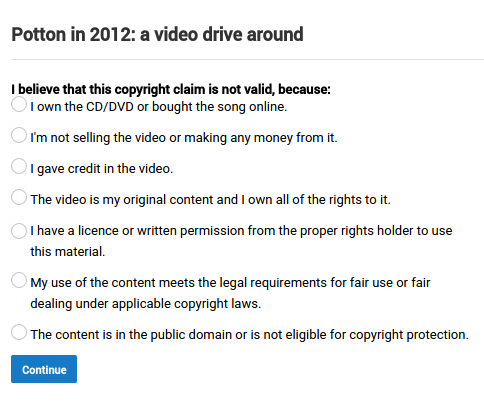 Some of them are hilarious: “I believe that this copyright claim is not valid, because I own the CD/DVD or bought the song online“, and “because… I gave credit in the video“. I’m assuming that these are some YouTube lawyer’s equivalent of the pit trap in Raiders of the Lost Ark where you inadvertently click “because… I’m not selling the video” and then they strap you into a chair and spend thirty minutes lecturing you about how Copyright Does Not Work That Way, you filthy music thief. Anyway, I deftly avoid these obvious routes to death: what I want is an option which says “the music you say is in here is not in here, you stupid robot”. That ought to be enough; as it happens, I can prove that I have the right to use the music that I did use, but that’s not in question; they’ve accused me of using their copyrighted music, and I didn’t. There is no option for that. There’s nothing on the list of choices for why I’m disputing the claim which indicates that the claim is irrelevant rather than disputable. Pander to the licence holders much, YouTube? Anyway, from the list, “I have a licence or written permission from the proper rights holder to use this material” seems like the right one. 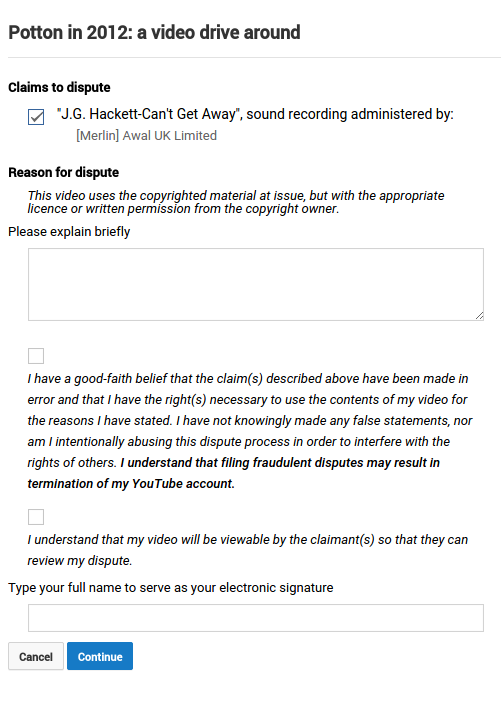 BZZT. No! You see there where it says “This video uses the copyrighted material at issue”? My video does not. This dispute reason means “yep, I am using your music, but I’m allowed”. I’m not using their music at all. So this is not the right path. Other options from the menu of choices are “My use of the content meets the legal requirements for fair use or fair dealing under applicable copyright laws” and “The content is in the public domain or is not eligible for copyright protection”, both of which also start from a proviso of “yep, I used your music”, which is not the case.

So the only one remaining is “The video is my original content and I own all of the rights to it.” Which is not true either! It’s not my original content; the music is Austin Graver’s original content, which he allowed me to use. What it isn’t, Awal UK Limited, is your music. YouTube don’t even seem to acknowledge anywhere that a copyright claim might be made erroneously, that I might look at a video of ducks on a river and say “hey! that video contains Sympathy For The Devil! Give me money!” when it absolutely does not. I should not have to prove that the music in the video is allowed — if it’s not, then that’s for the rightful copyright holder to dispute. If you claim my video contains your music and my video does not, then I should be able to say “my video does not contain the thing you’re complaining about” and that’s it. Come on, Google, sort it out.

However, as ever, I don’t want to get my Google account suspended or something while I fight this out. So I wrote a reason for dispute which not only said “this is not your music” but explained why I was allowed to use the music that I did use. 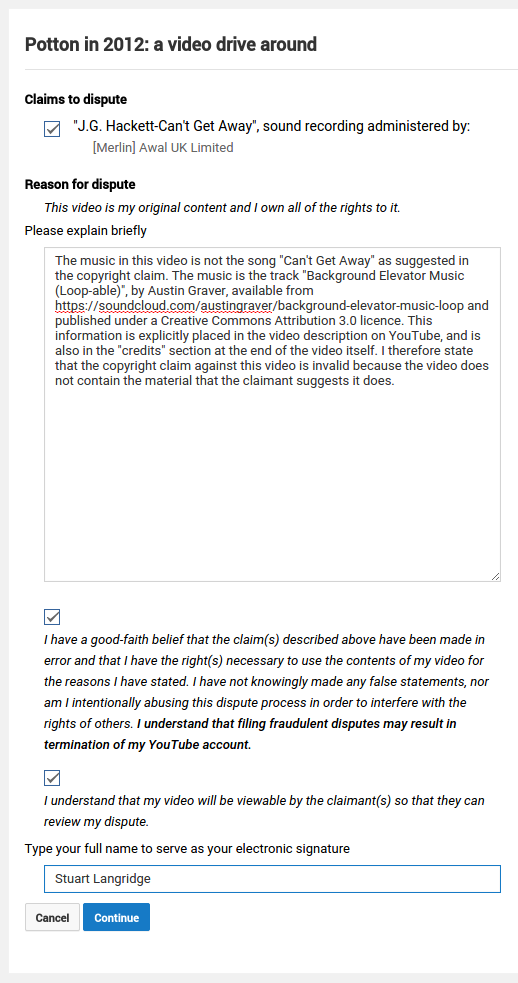 This is very annoying. Surely if I just log into YouTube and incorrectly challenge a bunch of videos for containing my copyrighted music when they don’t, there would be some repercussions? Some sort of punishment for me? Why does this not apply to them? The whole process is designed to make me feel like I have to humbly ask for permission, like Oliver Twist; sure, if I’d stuck a Beatles song on the soundtrack then I would have to humbly beg permission, but I didn’t, and assuming a priori that everyone does seems more oppressive than it ought to be.

Now we’ll see what happens next.