A tale of UI chains

or, big UI oaks do from little tech decisions grow

or, how Thunderbird screwed me a bit, although it might be my own fault

I have five levels of caring about email.* They are:

These levels get mapped to my inbox in the following ways:

In four years of dealing with my work inbox through Evolution, this scheme has stood me in good stead. However, at the weekend I moved to Thunderbird 9, and two days later it screwed me. Or I screwed myself while it stood by and laughed. Or something. And it’s all because my work IMAP account doesn’t seem to have a Trash folder. Follow the bouncing ball…

When you set up a new IMAP account in Thunderbird, it asks where you want deleted messages to go. The default setting is “Move it to this folder: Deleted”, which is what I have set for my gmail account.

However, for my work account, this complained that there was no such folder. Now, there’s a Deleted folder, with little green rubbish bin icon*, in the left-hand sidebar under my work account as well. Clicking on that also says that “The current operation on ‘Deleted’ did not succeed. The mail server for account (myworkemail) responded: Mailbox doesn’t exist: Trash.”

OK, thought I… maybe that’s not meant to work. Perhaps Canonical IS don’t want me storing all my deleted emails on the server or something. However, I can’t find a way of specifying a local folder as the Deleted folder for my IMAP account.

Now, I delete mail by accident all the time. So I was rather too scared to set “Remove [the mail] immediately” as my what-happens-when-I-press-delete-by-accident thing. Hence, the other option is to “just mark [the email] as deleted”. What this does is it ~~strikes through~~ the line describing the email in my inbox, so I can later on “undelete” it if I want. That seemed OK for a couple of days. However (this is the second level of however), what that actually means is that you end up with the list of emails you can see in the window all being struck through, which is annoying. So I need a way of saying “fine, all those deleted emails are actually deleted and not just me hitting delete by accident”, and that’s “Compact” on the folder context menu. 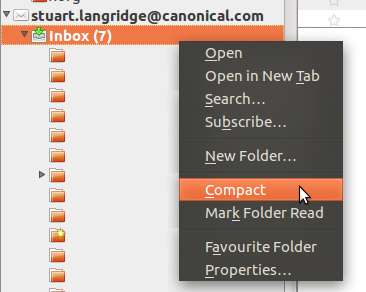 However (third however level), immediately below “Compact” is “Mark Folder Read”. So you can see that an inept person might accidentally click on the wrong menu item, and that’s exactly what I did. And now I can’t tell the difference between the 200 emails that I need to deal with and the other 200 that I might want to think about at some point, which is extremely irritating. All because I don’t understand why my work email doesn’t have a Trash folder.

Some of you will now be thinking: that’s what you get for indicating a permanent state (“I need to deal with this”) with an ephemeral marker (read status). And you’re right, I suppose. However, email has an Important flag and that’s it. There isn’t an Important and a Very Important flag. Oh, there might be extensions to add that, but I’d want the status to show up, and be changeable, from the folder list (not just from an individual email). So clearly I need to change my habits. Perhaps there’s an extension which colours the lines in the folder list differently depending on a flag I add? If I can change that colour from the folder list then that might be a good approach. How do you deal with differing levels of importance in email? Your thoughts are invited.