So, that was LugRadio Live 2009. The last LugRadio Live conference ever. We really mean it, this time.* Be warned: this could get long. In short, it was a blast. There are photos.* We had a great set of speakers, and they did us proud. All the talks were videoed, by LugRadio hero Tony Whitmore and his AV crew, and they’ll be linked from the LugRadio Live site when they become available. Particular highlights for me were Gerv Markham, who was not only his usual sterling self but also loaned me a clicker for the live show, and watching Matthew Somerville valiantly overcome Windows pain to put together a presentation anyway.

Actually, that bit of comedy probably needs a bit more explanation. Matthew showed up with a presentation that requires Windows — and already you can see the comedy begin to start — and then his laptop wouldn’t work with the projector. So, the call went out from the main stage: “Does anyone have a Windows laptop?” At an open-source conference. Not one person said yes. Anyway, poor Matthew eventually got his presentation up and running, in 8 glorious colours (not 8-bit, you note: 8. It looked like a photo negative) and did a very good job of introducing Theatricalia and various other things. 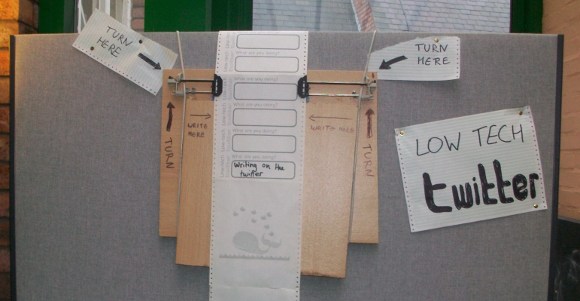 We had the usual LugRadio Live array of random things scattered around the venue; one I rather liked was Low-Tech Twitter, a paper version of Twitter constructed with loving care by Peters Cannon and Oliver. You cranked the handle round and then wrote your “tweet” in the next box to come into view. It even had the fail whale for all the times it fell apart while they were setting it up. Good work, lads. We also had a LugRadio condolence book in which people could leave their messages for the departing show (rather more than a few were cries for it to come back next year, of which more shortly), a Technic Lego build-cool-things competition, the return of the world-famous LugRadio Live potato stamps as proof of entry* and some really big A0 posters of the schedule provided by head of crew Ron. I didn’t realise just how big A0 was when I asked for them… It’s the little things that people remember about your event, when it’s gone. That doesn’t mean that you shouldn’t concentrate on the big stuff — speakers, seating, refreshments — but throw in some cool bits as well. They’re what put your personality on your event.

We did something a bit new this year. The main stage had three display screens. One, a free-standing screen off to the left, was used by our resident artistic genius Chris Hayes. Throughout the day, he drew caricatures of each main stage speaker. These were fantastic, and they’ll be published on the LugRadio Live 2009 website for everyone to marvel at in due course. Marvellous job, Chris; lots of people commented on how cool it was to see the cartoons drawn in real time, and I was really pleased with it. The second screen, one of the two big ones, was for the speaker themselves to show their slides on. No problem there. The third screen, taking up half of the back wall…was a live Twitter feed for the hashtag #lrl2009. One tweet at a time on screen. Anonymously. This excited some comment. Now, making the tweets anonymous was a deliberate decision of mine. In retrospect, I’m not sure it was the right one, but I’m not as unconvinced as others. My idea was that it would work sort of like a back-channel — people watching the talks could comment on the talks as they were going on, and, importantly, everyone else in the audience could see those comments live as they were happening. Now, this anonymity means that people can make what might be a negative comment about the speaker and feel OK about doing it. And, to be honest, I expected a goodly amount of humour to come out of this, and I was right. But…it made for a pretty harsh environment for some of the speakers, particularly the first couple who were on before the novelty of this new thing had worn off for the audience. I think, with the laser-like vision granted by hindsight, I’d have not made it anonymous, except for the live LugRadio recording — the LugRadio team expect that sort of interaction with the audience, and we’re at least partially about the comedy of the situation. Other speakers aren’t. So, if you hated the live Twitter thing, blame me. If you think it’s a great idea, on the other hand, you can do it at your conference: fstwittertag.html?q=lrl2009&style=custom.css is the URL we used, and you can replace the hashtag with whatever you want to track, and pass a full URL to your custom CSS file for it.

There was, of course, a live LugRadio recording. 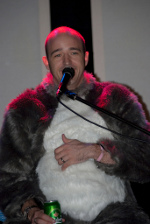 I was really pleased with the live show; one of the best we’ve done, I think. We talked about what’s changed in the tech world since February 2004 when we started recording LugRadio (conclusion: not much), and whether Oracle buying MySQL is a big problem (conclusion: possibly, although people like me who don’t care about 20th century technology like relational databases aren’t that worried), and the audience really got involved in both things. We’d been sent a number of copies of Jono’s book, The Art of Community, and gave them out to people for making insightful or amusing comments. For reasons passing understanding, Alan Pope got three copies, and apparently had them on eBay before we’d even finished. We’d asked everyone at the event to sign one of the LugRadio Live vinyl banners, and the seven* presenters all signed another, and we gave one to MrBen for being the community hero in perpituity, and auctioned the other banner, with proceeds going to the Open Rights Group. And then, for the finale, we had all seven presenters up on stage. Chris, Adam, Ade*, Matt*, Sparkes*, Jono, and me. It was great that all of us made it for the final LugRadio Live. We got a standing ovation, which was rather nice. Yep, you read that right. Final LugRadio Live. Now, I know we have known form with saying it’s the last one ever and then it’s not, since we did the same last year, but this time we mean it. However. We did a segment in the live show about open source conferences in the UK. Our intention was to say: what should replace LugRadio Live? Numerous people have said that there’s nothing quite like LRL in the UK, and although we don’t want to run LRL any more, we’d like there to be something a bit like it — a conference that caters to people who want to have fun, not to people who want to buy products or make partnerships or network. So, our intention with that discussion was to say: what do you like about LugRadio Live? What don’t you like about it? Which parts of LRL would you like to take forward into a new conference? And then once people had come up with lots of ideas, we were going to say, well, that sounds great: so who wants to organise it, then? It won’t be LugRadio Live — that was our thing — but we’d love to see someone else give us their view on what a fun UK open source conference could be.* And then we got a question from the floor. “If someone organised a conference next year, would you do a LugRadio live show at it?” That had, honestly, never occurred to us. Not one of the presenters had even considered this idea. So, after a few exchanged glances, we said: yes. So it’s quite possible that there’ll be another conference next year, crowd-sourced, or organised by a new group of people, or OggCamp II, or something, and there’ll be a live LugRadio recording at it. You just can’t keep a good thing down, it seems. There was the traditional Saturday night party afterwards, too. This included karaoke, about which the least said the better, I feel. Many thanks to Microsoft for paying for it, though :-)

The above-mentioned Tony Whitmore has, when not organising OggCamp or helping plan LugRadio Live or, y’know, doing his job or sleeping, spent the last eighteen months of his life creating a documentary called “The Story Of LugRadio”. It’s brilliant. We showed it at lunchtime on the main stage. It’ll be available soon, free to download. Everyone give Tony a big pat on the back (and then ask when it’ll be uploaded).

The day after LugRadio Live was OggCamp, a joint event organised by the Ubuntu UK Podcast and the Linux Outlaws. It was a really good laugh. Barcamp-style events stand or fall on how much fun you have there, and they managed it rather neatly; they recorded a live show (all of them together!), had some cool speakers, and did a raffle during which we elegantly rigged it so Jono won a copy of his own book. Heh, heh, heh. Good work, OggCamp people. I really hope it happens again next year.

So, that’s that. Thank you very much to all our crew, especially Ron and Dave M and Tony, all our sponsors, especially Matt Bloch at Bytemark, all our audience, and everyone who cried out for more LugRadio next year. It’s been a wild ride. Maybe we’ll be back. Oh, and if you’re still feeling the need for podcasts with Jono and I in, keep your eyes peeled for Shot of Jaq…