When the police admit that someone could end up on a secret police database merely for attending a demonstration, it is exactly the time to worry. — Mark Thomas, The Guardian, “Doth I protest too much?”

Disappointed that you’ve, at some point, exercised your democratic right to protest and free assembly and have nonetheless not managed to get on the Metropolitan Police’s spotter card list of mugshots of people who show up at protests a lot? Do you want to be one of the new menaces to 21st century society that are “domestic extremists”? Or perhaps we should call them “reds under the bed”? Well, help is at hand in the form of I, Troublemaker. See yourself alongside people who don’t like the arms trade, comedians, and other threats to our cosy way of life. I’m particularly pleased with outing that notorious extremist Gandhi, but choose your own satire (some of them are even government employees, for example). 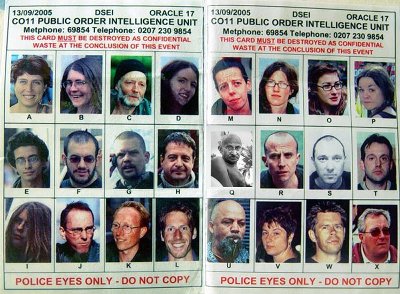