Well, we had the two days. LugRadio Live 2007 happened last weekend, and it was super-duper-superb, yes indeed. There are lots of reports you can read about what it was like (including one chap who didn’t like the show at all and called it an endless stream of sub-par nob-gags, which will be appearing on t-shirts in due course). My personal favourite bit, I think, was Adam walking out with his hooded robe to the Rocky music, but the whole thing was just unutterably great. If you want to see more of Adam, and you’re aware of meatspin.com, then you might like lugradio.org/sweetspin (really, really, really NSFW, though). Now it’s all over, I’d like to say thanks to people! Firstly, thanks to our crew. 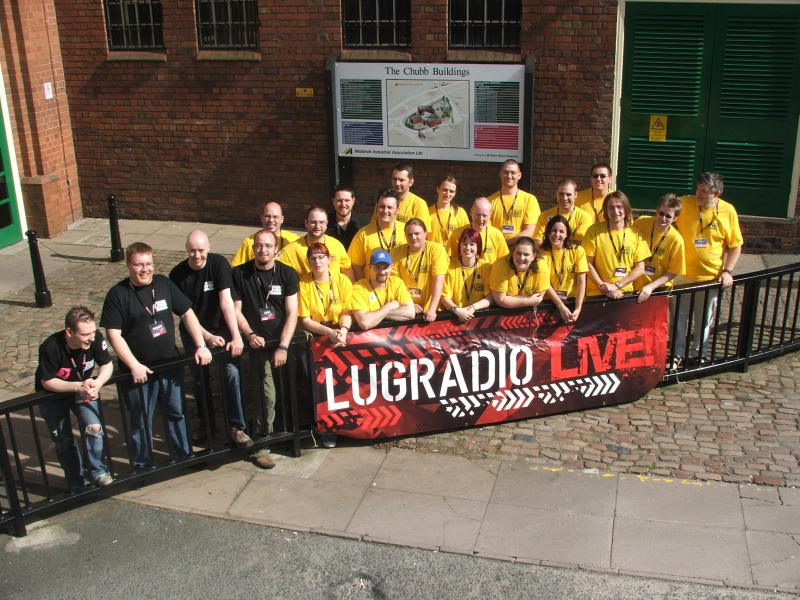 All the crew in one place

They did a magnificent job. There’s no way we could have got everything done without them. If you want to know how much work they did, take a look at Xalior’s timelapse video of the first day. Special thanks to Chris Procter and Dave Morley for being crew heads, Kat for making cakes, Ron’s wife for the morning bacon sandwiches, Ron for taking millions of photos (which will be available soon), and Rev. Tig for being the audio flunky and putting up with all Jono’s shit on the second day. You’re all heroes. Speaking of videos, a special thanks to Tony Whitmore and his video crew, who recorded a great deal of the event. We’re hoping to have videos available shortly of the talks — yes, I know we always say this, but this year we let Tony deal with it instead of us and so it might actually happen! Next, I want to say thankyou to the people who gave us money and things. That’s everyone coming in the door, of course, but also Bytemark Hosting, Sun, Google, O’Reilly, Red Hat, Yahoo, and Canonical. Bytemark and Sun and Google gave us the money we needed to put the event on, O’Reilly gave us lanyards and books to give as prizes, and everyone gave us stuff to go in the goodie bags (which were charmingly named the Lugradio Live Nutsacks). 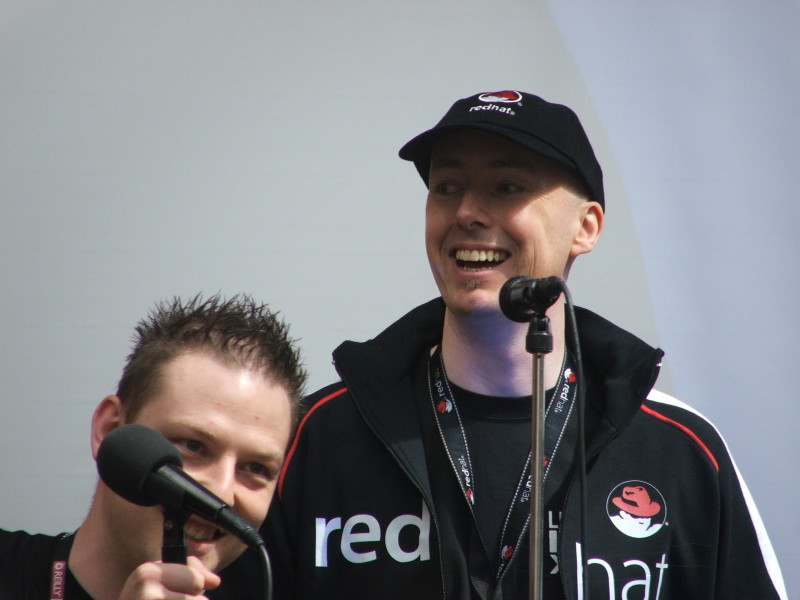 Ade was particularly pleased with the Red Hat stuff, shameless Fedora whore that he is

Next, the speakers. They all did a great job, some travelling from hugely far afield (America, Indonesia, across Europe), and people seem to have enjoyed the talks they went to. Special mention goes to Ted Haaeeeaaeaeeeeagaeeaer for using every swear-word he could think of now that he doesn’t work for Novell any more, Bruno and MrBen for the Great LugRadio Quiz, Steve Lamb, Chris diBona, and Becky Hogge from the Open Rights Group for what I thought was the most interesting talk of the day. Des Burley from my law firm, Mills and Reeve, gets an extra mention for not only doing a talk but ably coping with me putting him on the spot by asking questions about patents during LugRadio Live and Unleashed. Extra-special bonus thanks go to a chap called Chris Hallam (or something similar), who’s responsible for the BBC iPlayer, and who I pulled up on stage with no preparation to receive a booting from Becky and the audience about the iPlayer only working on Windows. Chris, I don’t know how your last name is spelled and so I’m having difficulty getting hold of you to say thankyou: if you read this, or if anyone reads this who knows who Chris is, can they contact me? 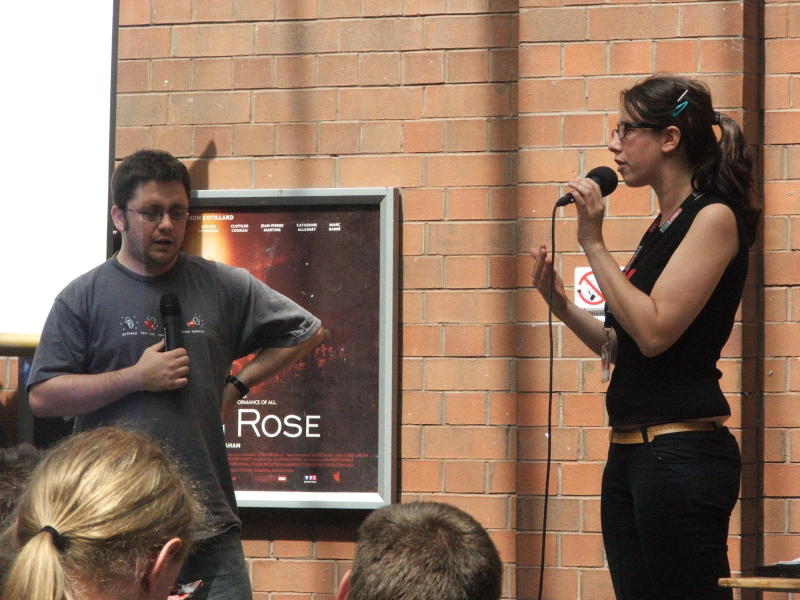 Chris and Becky on stage

Our exhibitors come next, and I want to say thanks to them too. The exhibition this year was a little smaller than last year, and a couple of people have said it was rather noisy for the talks (or that the talks were rather noisy for the exhibition!) — this year we put the exhibition in the same room as the atrium stage precisely because exhibitors complained last year that they were stuck off in a room on their own and it was boring. So…not sure what to do, there. Suggestions invited. Special thanks go to the exhibitors who came through when I walked around the expo at the end and hassled them for prizes that we could give away from the stage, particularly Josette from O’Reilly for giving us loads of t-shirts, Jon and the gang from Red Hat for giving us a shitload of stuff, and the GP2X people for giving us a GP2X to give away! Wish I’d got it. Of course, we ended up giving the GP2X for the best LugRadio story to a woman who suggested that I should look like someone from Shaun of the Dead, for which she gets all of my no love. Hmph. Extra special thanks to John Leach, who designed all of our t-shirts (the special ones for the four large gents and the crew t-shirts), despite the crippling burden of his ridiculous new afro haircut.

Finally, there were two pieces of news that we announced at the end of LugRadio Live and Unleashed. The first, the bad news, is that Ade’s decided to leave the show. No more bald man. We tried to talk him out of it, but apparently he wants to spend more time with his razor or something. Ade, here’s the bit where I say: thanks for everything over the last few years. The show won’t be the same without you, it really won’t. We’ll miss ya, especially when it comes time to look into Ade’s Crystal Bald to see what’s coming up for the next year in Linux and we don’t have it any more. However, Chris Procter, who’s been a stand-in presenter on the show before, is bravely stepping into the void left by El Baldo de Maximo. Chris has the same sysadmin leanings as Ade (although more hair, but not by much), and I’m really looking forward to the next season — as you know, Adam has also recently replaced Matt, so there could be an entirely new vibe for the new season! Goodbye to Ade, and hello to Chris: season 5 of LugRadio will rock harder than anything ever has. Chris will be part of the show during this coming week, when we’ll be recording a series of special shows at Guadec, the Gnome User and Developer Conference in Birmingham. Look out for them! 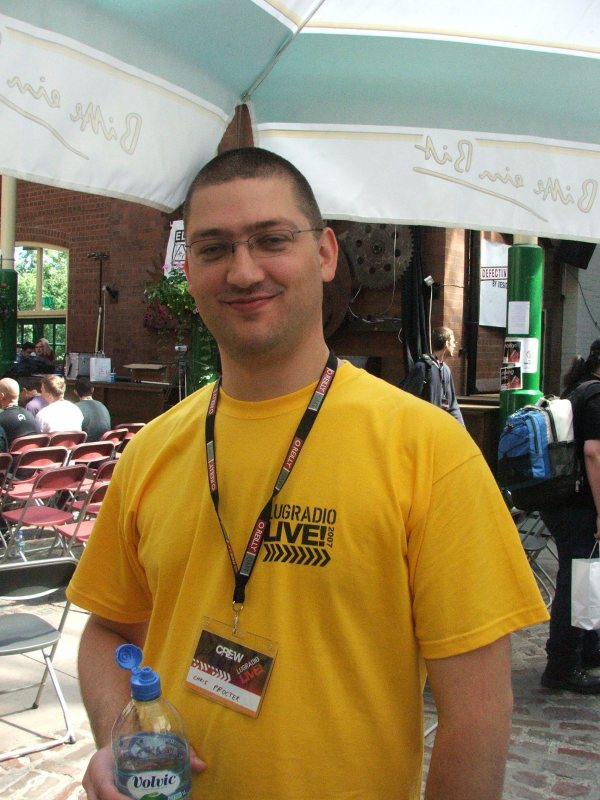 The Lord of the Rings, as Chris is affectionately known

The second piece of news is, after much questioning and requests, LugRadio is coming to America! Yes, yes indeed, LugRadio Live USA will be happening in the San Francisco Bay Area in March 2008! More details as we have them; we’ll be putting up a site soon where you can see what’s going on and buy tickets. Big thanks to Google for making this possible. We’ve talked a lot about how we wanted LugRadio Live USA to have the same feel, the same vibe about it that LRL has here, and we’ve been convinced that that’s possible. So, we’re coming to the land of the free. Prepare yourselves. Next year there will be two LugRadio Lives. I can’t wait. 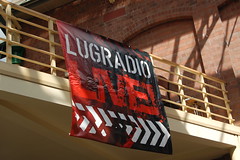