LugRadio Live 2006 is over. Eight months of planning all for three days. The happiness nosedive is massive after LRL; leaves me wanting to organise another one next week just so I can make it all happen again. It was wonderful. What a great weekend. A few things I ought to call out as specifically superb:

Kat’s cakes
Kat made cakes for the evening party, which went down a storm.

Huw Lynes
Huw declared just before the big day that Bruno Bord is a being of unimaginable evil to convince people to come to his talk instead. Quality humour that man, although I ought to point out that that trick didn’t work when Jono tried it for Guadec.
Pictures, pictures, pictures
Like all events and all things, we have a selection of photos on Flickr. Some of them are really cool, although none of the ones with my lack of beard in them.
People i wanted to speak to
Once again, just like last year, hundreds of cool people flood through the door and I only get to speak to a tiny fraction of them. People this year who I particularly wanted to chat to for five minutes and didn’t really get the chance because I was too busy: Mike Hearn, Michael Meeks, Matt Zimmerman, Mark Shuttleworth, Drew Mclellan and Rachel Andrew, Simon Willison, lex Hudson, Des Burley, and plenty of others besides. I wish it could be a week long.
Talks I wanted to see
Similarly to people, there are talks. I never get to see any talks at LRL, it seems. This year I saw four talks from beginning to end: Bruno’s one about Lugradio; Mark Shuttleworth’s N Big Challenges, Kat, Jen, and Phated’s one about women in open source; and LugRadio Live and Unleashed, which hardly counts because that was us. I caught the latter half of Mike Hearn’s, confirming my opinion that what he’s describing is the right way to go about things even if no-one listens. That was it. There were so many good things going on. Perhaps too many, in fact, which leads me on to…
Things wrong
Lots of people have said: there were loads of times when stuff I wanted to watch clashed. Now, that’s part and parcel of being at an event; there are always going to be clashes. However, a couple of people remarked that there were points when they wanted to go to the main stage talk and both the lightning talks and a BOF all at the same time. I’m not sure what we can do about this, since the only two approaches I can think of are (a) make LRL longer, which is problematic (it involves time off work then, and we’re not the sort of event that your firm pays for you to attend) or (b) have less stuff going on, which basically means making the weekend less good! Suggestions on a postcard for that one. The air conditioning: yes, yes, we know. We don’t have a lot of luck with air conditioning, it seems. BOF points not in the main area: yep. That was sort of an experiment, and we’ll know for next year; BOFs need to be in a little enclosed area, like BOF Point 3 was this year. The exhibition was a little out of the way. We didn’t think it was, really, but it obviously was from the comments of our exhibitors. There are a few ideas for how to fix that next year. Any other suggestions for things that could have been improved will be gratefully accepted!
A community track?
I wonder next year whether we should have a special track for speakers who are part of the LugRadio community. We’ve got a pretty vibrant community; lots of you show up at LRL, and there are the forums and so on; it might give us the chance to highlight people who wouldn’t ordinarily get to speak at conferences. Something to think about for next time.
No beard
I have no beard. After dotwaffle doubled his contribution to Amnesty International, I shaved mine off as well as Jono doing his. This was a sad moment in my life: 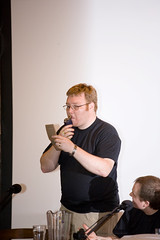 I’m growing it back, assuming I’m allowed. I look about 12 now. Christian Schaller and Edward Hervey, who I now hate, reminded me of this not less than once an hour from the time of shaving until the moment they left, so I have decided that we should stop using gstreamer for Jokosher and start using jack or something instead.
Jokosher BOF
The Jokosher BOF was actually pretty productive. Summary notes are on the mailing list, and we know roughly where we’re going for 0.2, which is all cool. Plus we have photos of the dev team, or at least all those who were at LRL.

In short, wow. I’d like to personally thank everyone who turned up for making it the best community event around. See you next year.