I’ve just finished reading Transmetropolitan. It’s pretty cool. I’d never actually read any of it before, although I was aware of who Spider Jerusalem was in a sort of light way (mainly that he looked like James Grant over at Flem Comics. What surprised me the most was that he actually is a journalist; that’s his point. As I say, I knew roughly about it before, including his profession, but I thought that that was just background: I didn’t appreciate that the whole deal is that he is. Even given the whole gonzo-journalism-but-turned-up-to-eleven vibe. Pretty cool, in the sort of way that rabbits freeze in headlights and people watch in brain-loop horror as their children fall off a wall; your thoughts lock solid and all you can do is watch in captivated fascination. There has to be an explanation for that. Everyone says afterwards, “I should have done something. I don’t know why I didn’t!” And the reason you didn’t is: you didn’t think of it. There was no thought in your mind about stopping the thing, just of watching it. Must be why TV is so successful, as a watered-down version of the same reflex. Anyway, that’s what reading Transmet was like. Sorta.
Has left me with the urge to go and shoot some stuff and do some writing, though. Not necessarily in that order. See, I don’t think this is a world where you can just wander around the place punching the shit out of people and occasionally shooting them. Spider can do that and you can’t, not because he’s cooler but because his world lets you. Then again, Nick Kent probably could have done it, too. Different world.
On the third hand, it’s a lot easier to deal with Spider Jerusalem when you’ve met him in real life. 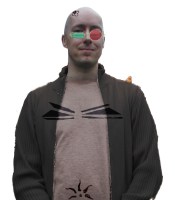