Happy War, Xmas is over.

Jamie Zawinski complains about a band giving out rolling papers branded with the band’s name in his club:

I mean really, in what parallel universe is doing something like that ok? Don’t these people watch the news? Don’t they realize the kind of bullshit crackdowns nightclubs are facing these days? The DEA claims that glow-sticks are drug paraphernalia. I wonder what they’d think about rolling papers? Oh, but I’m sure “it’s cool, man” because they probably said “for tobacco use only” on the back. Morons!

No, wait. In what kind of parallel universe is it reasonable that a nightclub owner might get their knickers in a twist about possession of rolling papers? I’ve got some in my pocket right now, because I smoke rollups. Blimey, that makes me a drug user, right? What happened to fighting the power? I suppose now that drugs are the single greatest evil in America (well, they’re fighting for the gold medal position with Iraq and terrorists and Osama Bin Laden), anything even peripherally connected with them is a big no-no. And why is this the band’s problem? If a nightclub worries that the faintest suggestion that drugs exist is enough to get them shut down, then it’s the nightclub’s job to worry about it. Not the band. The band are giving out promotional materials; so what if their fans decide to use them to roll spliffs? Not their problem. If the DNA Lounge management had said, you can’t do that here, because were worried that the gummint might shut us down if someone in here possesses some sticky paper, the band might have said, OK, you’re clearly anti-smoking fascists, but there we go,and not done it. But no, they’re just “morons”. I think not.

Personally, I don’t think that Mark’s posts by citation thing is all that exciting, but I seem to be in the minority. However, much like many other things that Mark does, it’s taught me something that I didn’t know (or in this case thought I knew and was wrong): I was under the impression that the thing in a \<cite> tag was the text you were citing, not the person who said it. Since, when I quote text, I tend to make it a link to the remote site from which it’s quoted, I didn’t really see the point of the cite tag. Now I know better, which is good.

Tantek has extensively buggered about with the underlying HTML on his weblog; posts are now list entries in an unordered list. Clever. This site is well overdue a serious makeover.

Sarabian talks about reading RSS via NNTP. I’ve toyed with this idea a bit — I already convert mailing lists that I read into newsgroups, and it would mean that, if I could finally find a decent bloody client, that I could read mail, news, and weblogs all in one place. However, I don’t think that the NNTP model really matches RSS, because the essence of Usenet news is threading; without that, you’d have a newsgroup for each weblog with individual posts. What I’d really like to do is sit down and plan out how I can use Trackbacks, Pingbacks, referrer log entries, etc etc, to create a thread list for a post — in essence, create a References field for a given post. To do that, though, I’d need to screen-scrape each site I was interested in (because RSS doesn’t contain referback information), and then we get back to the “use XHTML for syndication” debate and everyone whines about how it’s heavy on bandwidth and I’m stupid to even think that it’s a reasonable approach. So that information’s inaccessible.

I got a DVD player and a CD burner for Christmas, so I’ve been exploring the wonderful world of VCDs. I also ran into a bit of a problem with hooking is up to my telly, because the telly is old. Ironically, Dave Farquhar wrote about exactly this problem just after Christmas, but I ignored his advice, because my setup’s slightly different. See, most people would have a TV, with a chain of stuff connected to that TV. I, however, have two outputs from the chain; a TV, and a little box that rebroadcasts whatever signal you feed it, so that you can tune another telly in the house somewhere into the box’s frequency and therefore beam, say, your video to a telly without a video on it. Neat, huh? But if I have all my signal producers (the aerial in the wall, the box for the cable telly, the video, the DVD player) in one long chain, you won’t be able to send one thing to one telly and a different one to the beamer box. So it’s set up like this: 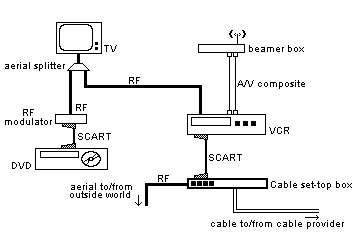 The DVD doesn’t connect to the TV digitally because the TV only has two inputs; a normal RF aerial lead, and a weird little 5-pin DIN socket (no, not a mini-DIN) with “Video” written above it. I assume that this is whatever odd video lead standard Hitachi were pushing when they built this telly. But the DVD only outputs composite A/V, SCART, and S-Video, so I had to buy a (30 quid!) SCART-to-RF modulator box, and then put the RF aerial feeds from the video (and cable and normal TV aerial) and the DVD into an aerial splitter and then into the back of the telly. So normal TV is on channels 1-5 on the TV, the video is on channel 0, the cable telly is on channel 6, and the DVD is on channel 7. This does mean that I can beam cable telly or a video while watching a DVD on the telly, which is great. I can’t beam DVDs, but the beaming is to the TV in my daughter’s playroom, and she hasn’t got any DVDs, so that’s OK.